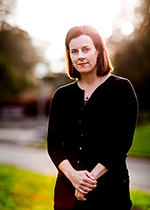 Martha Conway’s latest novel, The Underground River, was selected as a New York Times Book Review Editor’s Choice. She is also the author of Thieving Forest, which won the North American Book Award in Historical Fiction, and Sugarland, which was named one of Kirkus Reviews Best Books of 2016.

Martha’s short fiction has appeared in the Iowa Review, Mississippi Review, The Quarterly, Carolina Quarterly, and other publications. She has reviewed fiction for the San Francisco Chronicle and the Iowa Review, and is a recipient of a California Arts Council fellowship in Creative Writing. In addition to writing, Martha is an instructor of creative writing at Stanford University’s Continuing Studies Program and UC Berkeley Extension. She received her BA from Vassar College in History and English, and her MA in Creative Writing from San Francisco State University. Born and raised in Ohio, she now lives in San Francisco with her family, where the fog reminds her of lake-effect cloud cover in Cleveland.